A riddle from the 19th century jewelry history

So here is the answer to the riddle. The jewelry that you see in the photos are made of... human hair. :) And metal, of course, mainly functioning only as a framework.

Hair had been used in jewelry since the 17th century, with panels of plaited hair placed under crystal in a jewelry piece. In the beginning of the 19th century, a technique was created to plait hair on flat surface which was then glazed and cut into pieces to form patterns.
The other type was introduced by the 1830s, created from three-dimensional elements – chains, rosettes and bows – made from woven hair. Jewelry pieces were stiffened to keep their form, sometimes different hair colours were interwoven. Some pieces were transparent, while others were not, where hair was woven round a wooden core. The skill was perfected by the French in elaborate fringing in which silk was used for the same technique. The fashion went to Switzerland, Germany, and, through prince Albert, reached England and other countries.

Victorian hair jewelry is often classed with mourning jewelry, but this is to overlook its importance in the language of sentiment and friendship. Hairwork bracelets were among the gifts exchanged in 1855 by the Queen Victoria and Empress Eugénie. A favourite offering from a young girl to a special male friend was plaited hair watch–chain. Hair, due to their elasticity, adjusted to the size of the wearer.


By the way, hair artists called Davorens, in one of their advertisements, assured that they „guaranteed that every order be made with the hair entrusted to them.“ This was intended to allay fears of the hair of strangers being used. 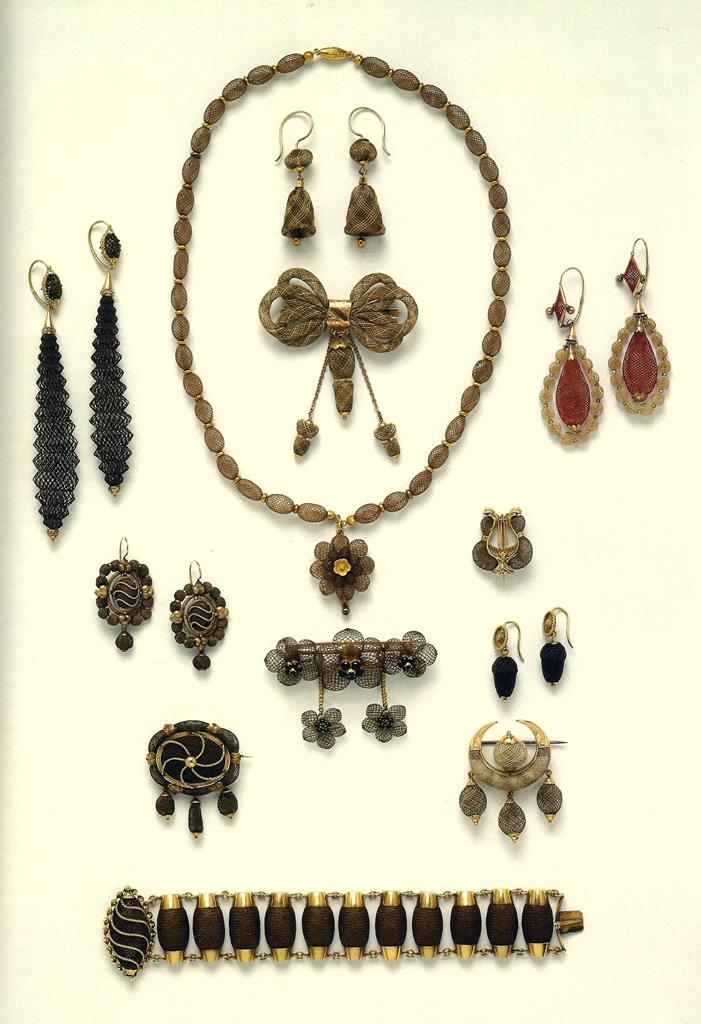 Hairwork jewelry, 1830–1870.
Photo from „Jewellery in the age of Queen Victoria: A Mirror to the World“


Source: „Jewellery in the age of Queen Victoria: A Mirror to the World“, Charlotte Gere and Judy Rudoe, 2010, British Museum